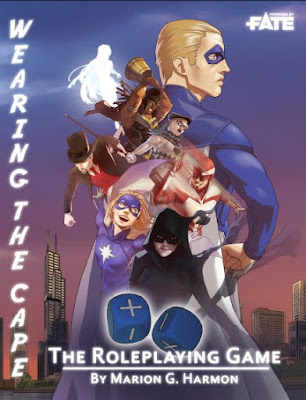 As you may have picked up from my previous posts.  I am a huge fan of Marion G. Harmon's Wearing the Cape Series of books.  He has announced that the Kickstarter for the upcoming Role-playing game based upon his book series, of the same name,  is going live on February 1st!  The game will be using the Fate System.

I urge anyone taking time to read this post to take a few minutes and check out Mr. Harmon's post.  If you have a little more time, pick up one of his novels.  I think you will enjoy the world he has crafted.
Posted by Grayranger at 12:29 PM