Our first MSHRPG Issue #1 “Convention Gone Wild” starts off with our not-a-hero yet characters arriving at a large Comic Book Convention, in an unnamed town, that oddly enough never gets referred to by name during any actual scenes.  Yet, most comic fans inherently know where the soon to be heroes are, and what kind of Nerd/Geek lunacy too expect during a large gathering of comic book aficionados.
Al and Simon arrived separately and met up in the main foyer while waiting for the doors to open for the convention floor.  Our ex-military and current teacher Al, hit it off with Simon, our meek and timid grocery store general manager, over small talk concerning comics and heroes.   A quickly growing crowd was gather around our heroes, all eagerly awaiting to charge the convention!  It was during this time when a middle aged man, dressed up in costume as a Satyr, walked up next to Al and Simon, and engaged them in conversation.  As they casually check out the “weirdo” dressed up in “goat costume” they noticed he was very excited about getting into the hall and talking to someone in the vendor area. 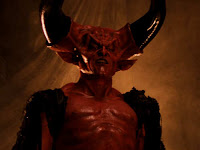 As the doors opened to the main hall the heroes were caught up in the excitement as much as the other convention goers.  They quickly moved across the floor and were amazed with all the displays and booths filled with a cornucopia a nerdom!   They moved from booth to booth and aisle to aisle and eventually found themselves near the back corner of the convention hall when they were approached by Darkness, You know the big demon looking guy played by Tim Curry in Legend (1985).  He approached our heroes and demanded they tell him where the horns of the unicorns are hidden!
They walked away from the large and very convincing Legend cosplay, talking about how committed that guy was to the role.  Then a fight broke out between Darkness and what appeared to a Darth Maul cosplayer with an amazingly real looking double-bladed light saber.  The fight quickly escalated until Darth Maul executed a sweeping light saber strike and separated Darkness from the bottoms of his legs.
Darth Maul then approached the duo and demanded to know where to find the Jedi!  The two looked around dumbfounded as the hall erupted in chaos, as all the cosplayers were turning into real versions of the characters of which they were dressed.

[At this time, I would like to take quick break in the description of the events of the game and acknowledge that I have stolen this idea from the Author Marion Harmon who wrote about similar events in his most recent novel:  Team-Ups and Crossovers (Wearing the Cape Book 6).  Shhhh, don’t tell my players!  Also, big thanks to Mr. Harmon for such an awesome idea!  Back to the action…]
Simon, who had come to the convention dressed as Iron Man in his self-crafted suit of armor then also changed into the “real” Iron Man.  Catching Darth Maul by surprise with a quick Uni-beam to the face, put Maul out of commission.  Iron Man then launched himself into the air and went to save the other convention attendees from harm, leaving Al standing next to the bathroom with very realistic looking light saber at his feet.

It was at this point that Art3mis from Ready Player One by Ernest Cline ran up to Al and said that she needed his help stopping the individual responsible for this fiasco before anyone else got hurt.  So Al, who had been looking for a moment like this his whole life, snatch up the light saber and told Art3mis to lead on!  Art3mis then promptly lead Al into the men’s restroom just a short 30” away.  With only a small amount incredulity Al followed her into the restroom and ignited his red double bladed light saber.
Meanwhile, Iron Man (aka Simon) was flying around the convention center doing away with as many villains as possible, while trying to rescue the civilians, when he is ambushed and knocked from the sky by Thanos.  He rolled to a stop near the very same bathroom that Al had just entered.  Simon returned to his senses, as his armor (now normal plastic again) began to fall off of him, damaged from his ambush and fall.  At least he managed to stop Cthulhu from devouring the eastern side of the convention hall.  Simon heard several shouts and yells from the bathroom and moved to investigate, especially since one of them sounded a lot like Al.
What had confronted Al and Art3mis was our friendly neighborhood Satyr clutching a gnarled looking branch.  He was talking to himself in hushed tones as purple light pulsed from himself and the staff.
“No, I am in charge!  I am the Locus!” he bellowed as the purple pulse grew in magnitude before he continued to mumble and argue with himself.  Art3mis and Al then moved to the end of the bathroom and attempted to talk him down, but he didn’t even react to their questions.  Finally Al told Art3mis they need to get the staff away from him, only to be interrupted by the Reverse Flash zooming into the bathroom in a blur of Yellow and red lighting.  He was quickly stopped by Al’s light saber igniting and leaving a damaged and poorly made Reverse Flash costume on a very confused looking teenager.
When Al turned back to Mr. Locus/Satyr, he saw Art3mis thrown across the bathroom and into the glass mirrors above the sink.  Turning to face The Locus he swung his light saber but as it struck the glowing branch it returned to an aluminum prop that only looked like Darth Maul’s light saber.  Simon then slowly entered the bathroom and saw the commotion and a nearly naked teenage Reverse Flash quickly backing away from the glowing staff and The Locus.
Simon looked at Al and they both charged The Locus.  Simon went for his legs while Al’s flying tackle took him down and back into the bathroom stall.  As the three fell to the floor in a tangled heap, the purple glow cut out.  The unconscious Art3mis transformed into a normal looking young woman with a decently constructed but damaged Art3mis costume.
Al scooped up the now inert staff and turned to Simon and quickly exited the bathroom, after making sure that normal Art3mis wasn’t hurt badly and The Locus was still unconscious.   They quickly exited the convention center avoiding the confused and beaten up convention goers, police, and who looked to be the FBI arriving.  They returned to Al’s hotel room on the 10th floor of his hotel to compare notes and take a closer look at this "magic" branch.
This is where the first issue ended.  We will pick up with Issue # 2, next time!

Posted by Grayranger at 5:52 AM