The Long Dark, 4 Days of Night

I was drawn into The Long Dark well over a year ago when I found the game by Hinterland Studios on Steam.  The game is a sand box survival game set it the far north Canadian woods.  The game designers have been working towards a story mode release but in the mean time have opened up their world for us to explore and survive.  The game is really fun and has beautiful graphics, I often find myself exploring out of the way nooks just to see what it looks like.

I plan on doing a more involved review once the story mode is released but since Hinterlands Studio is doing a special Halloween event for the next few days, I wanted to take a few minutes and let everyone know about the event.  From October 28th - November 1st, the sun will not rise in the game.  You will attempting to survive in the arctic cold of the great north...with no day time!

The patch note also mention demon wolves...but I haven't run across any of those yet.  To help the players out the game light sources last longer and you can find fall/Halloween themed food that will help you stay warm and ward off the demon wolves.

I know it is a short event and game designers may not do it again until next year or they may not do it again at all.  So I encourage everyone who has played this game or thought about playing to give it try this weekend and check out the special event.

Have fun and I will be playing as well!
Posted by Grayranger at 6:32 AM No comments:

I am a huge fan of Dragon Ball and all the continuing TV series aired on Cartoon Network back in the 90's and early  2000's.  I spent many an afternoon watching the adventures of Goku and friends and their antics to save the world.

Over the years I have tried out the Manga and found I didn't enjoy it as much as the cartoon though it does have its strengths.  I have also tried out several of the video games with Dragon Ball Z:  Budokai as my reigning favorite...at least until Dragon Ball Xenoverse came along.  I enjoyed Xenoverse 1 so much that On December 25th, I found myself at the local game store picking up my copy of Xenoverse 2 as soon as it became available!

Xenoverse allowed you make an original character the Time Patroller and then take that character to all of our favorite moments in Dragon Ball history and set right events that the mysterious villain had changed.  Not getting into any spoilers about the first game, lets just say with a little help from friends you save the universe and time itself! 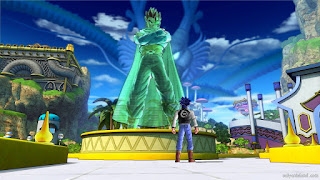 Now in the sequel, you once again make an original character.  Toki Toki City has become Conton city in Xenoverse 2, and is much larger than the previous iteration.  Once you finish the intro mission and training you a lead to the center of town where you have the option to choose a character from your Xenoverse 1 save data to transfer over to Xenoverse 2.  You can't play the character but you can see them immortalized in a holographic statue in Conton City for their actions in the previous game saving the universe!  You also will gain the equipped abilities and clothes from that character.  So you may want to fire up Xenoverse 1 and make sure your character is equipped with the abilities and clothes you want to transfer.

After the intro and character transfer you then have an open sprawling city of Conton city to explore!  and like the first game you have your time patrols where you will travel in time to set right events that have been altered, you can also train with various masters, conduct parallel quest (think "what if") events in Dragon Ball history, and eventually open up the skies of Conton city for you to fly around.

The fighting mechanics are quick and fluid and once you master the controls you find that each battle will play out quickly...for better or worse.   One aspect I was hopping would get added to the game was a Ki battle.  So no using a kamehameha wave and having to battle it out once your attacked meets your opponents ki attack.  This game is more of a you shoot and they shoot kind of sequence.

If you didn't like Xenoverse 1 then you may not care for the sequel.  The game shares the same game set up and mechanics, though the opponent targeting option does appear to work better this time around.

I would recommend this game to any Dragon Ball Z fans and suggest that fans of the older video games give it a chance as well.  It is currently available at most retailers, Amazon, and Steam for $59.99.

Posted by Grayranger at 5:15 AM No comments:

This War of Mine Review 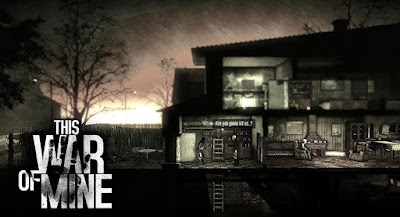 This War of Mine is a strategy survival video game by 11 Bit Studios.  I first found out about this game via Paul Soares Jr. on his YouTube channel Paul Soares Jr. youtube Channel.  I have been an avid watching of Mr. Soares since his early Minecraft how to Survive videos and have found him a terrific source of new games since he branched out and began play testing new tittles.  I purchases the game on Steam and have been enjoying playing though the story.

This War of Mine at first glance is a simple point click and move your character around a side-scrolling map, but has a much deeper game play that is apparent at first glance.  The game loosely based up the siege of Sarajevo during  the Bosnian War (Wiki says 1992-1996).   You play a group of civilians that have holed up in an abandoned home and must scavenge, trade, and/or steal to survive.

The starting characters are different with each play though and have their own strengths and weaknesses.  Such as a strong character will have more equipment slots to bring home scavenged materials but may be much slower in movement.  While a quicker character may be a better negotiator or stealthier.    These traits will help shape how you play the game and who will stay home each night to guard the house from bandits or go out in search of supplies.

Like I said you start off exploring your house and discovering some meager supplies and what locations you have available.  Eventually you will open up more parts of your home and begin to equip it with the materials (wood, metal, and maybe parts of firearms) and equipment (rat traps, water purification system, or a alcohol still) to help your characters survive.  Each day is broken down to daytime and night time.  During the day you can rest and work on your home, but during the night you can select who will rest, be on guard at home, and who will venture out into the war torn city and look for equipment and supplies. 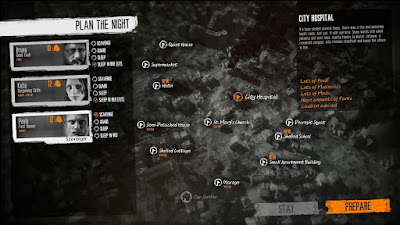 When you go out into the city you will encounter different locations and people.  Some of these will be hostile towards you, while others are in similar dire straits as your characters, and will be will to trade or need your help.  I found that my choices would not only affect the moral of my characters but how other NPC's would interact with my characters.

All in all, I am really enjoying the game.  right now the base game is available on Steam for $19.99

Posted by Grayranger at 5:48 AM No comments: 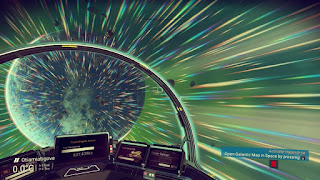 I have to admit that after my first exposure to No Man's Sky I was a bit overwhelmed and didn't really know where to go or what to do in the game.  I remember having a similar feeling when it came to learning about and playing Minecraft several years ago.

The open world...er open galaxy has taken some getting used to, and I love seeing the new worlds and how beautiful they are.  I frequently find myself stuck on a world having to go chase down resources so that I can power my thrusters or hyperdrive so that I can leave and find the next world that I am stuck on until I gather enough resources to get off world.

I am also following the path of Atlas and it is just interesting enough to keep me going and see what the next part will bring.  With me being busy out of town this month, it has been hard to make time to play any games, so this update is going to be brief.

I am going to continue my journey with No Man's Sky and will keep you all updated as I find more interesting things to talk about.  Oh yeah, speaking to alien races is fun and weird...I need a universal translator from Star Trek!

Posted by Grayranger at 8:02 AM No comments: