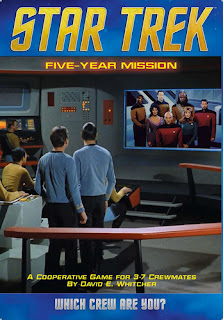 During our vacation week we had the opportunity to try another new game, Star Trek:  5 Year-Mission, by Mayfair Games.  I had not heard of this game until my friend showed up at the house, pulled it out and said lets play.  It is a small box and only hold a few items;  two sided character templates, alert cards (blue, yellow, and red), two sided play mat, and different colored 6-sided dice.

The first thing you do during set up is choose either Original Series Enterprise and her crew or The Next Generation Enterprise and crew.  Once you have chosen your time period you then choose which crew member you want to play.  For our first play through we went with TOS and I choose Scotty as my character.  The only caveat to choosing characters is that one player needs to be either Kirk or Picard, the ship has to have a captain! 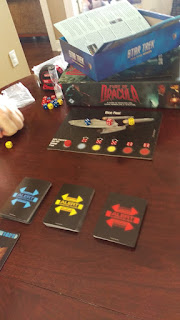 The game begins by setting up the first blue alert card which is always "Five Year Mission"  Now the meat of the game is that each player must roll a pool of three different colored six-sided dice.  You then match up any of the values on the dice to a corresponding value listed on the Alert card.  If you match up all the required dice values, you complete the mission and either set it aside for scoring or discard and remove from play. 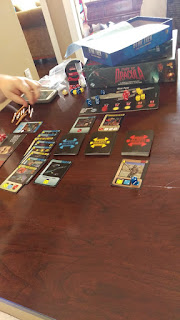 I will say that the most exciting part of the game is how they built up a sense of drama and urgency by introducing timed missions.  If you flip over a timed mission then you must use a provided 3 min hour-glass (I guess its a minute-glass) and then start the time.  You have until the sand runs out to finish that mission or it is failed.  The loose condition for the game is if you fail 5 missions then the game is over.  The other way to fail is if you have to draw a mission and i would place you at 4 active mission of a specific color then you fail the oldest one face up.  It happens pretty quick

The victory conditions must be agreed upon before the game starts, for example the Ensign victory condition is that you will complete two mission of each color and have 10 points total of completed missions (the point value may be mistaken, I can't remember).  What we started doing on subsequent games was to play until we failed and see how far we could make it.  One of our games we managed to get an Admiral Victory, and wow was that hard!