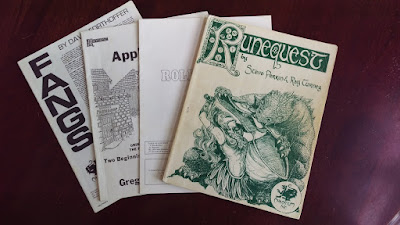 I am still pretty new to the this whole "Kickstarter" thing.  If you read my earlier blog post about the Ghostbusters board game, it came from a Kickstarter campaign.  A couple of years ago I missed a one campaign for a two volume Glorantha compendium.  I have since tracked down copies of those compendiums but I hate the fact that I missed the original campaign.  Runequest Classic was an early RPG that I discovered in an old musty basement.  Here are my copies of those books and as you can see the main book is well worn.  I have used it to play Runequest off and on for over 20 years.

Here is the link to the Runequest Kickstarter: 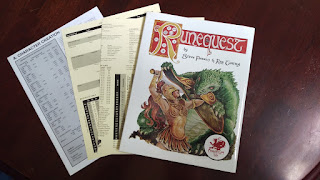 Once the Kickstarter was complete they publisher made the digital down loads available for each item that was included in the Kickstarter.  Those were fantastic and it was amazing to have copies that had been reworked and were of very nice quality.  Then a week ago the new hard bound leather rule book with its nice color dust cover arrived!  I am very excited to have another copy of my old book and one that is in much better shape.

The only downside to this process is that it takes some time upon completion of the Kickstarter campaign to get the hard copy of the books.  This is due to time or processing and allowing the printer to complete the order and then arrange shipping, and in this case, it was international shipping as well as domestic.

Posted by Grayranger at 4:59 AM

Email ThisBlogThis!Share to TwitterShare to FacebookShare to Pinterest
Labels: RPG