Back to the Future: An Adventure Through Time Review 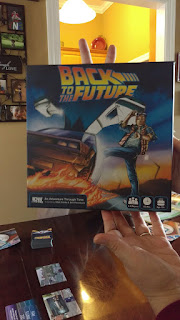 I am a child of the 80's!  There is no shame or accusation in that exclamation, just the simple fact that I suffer form 80's nostalgia.  One of the those is the Back to the Future movie series.  One of my friends brought over his copy of the new board game Back to the Future:  An Adventure Through Time.   If you are not familiar with the original movies you may be a bit lost, I apologize for not going more in depth in regard to the movies, but trust me, take an afternoon and get caught up.  You will really the movies!

So of course we had to give it a try.  By the way that same said friend is the giving the box cover rabbit ears in the picture on the left.  With all this said, I was a bit dubious of how well you can make a board game of Back to the Future without crossing the "Too Silly to Fun" line or wow this is a bad game syndrome form the 90's.

I have to report that is far from perfect, but we did find it to be a fun game that meets my families current game requirements.  Easy to set up, rules that are fairly quick to learn, and a deceptive amount of meta-strategy.

The game consists of a deck of mission cards that have three names listed.  There is a short stack of 3 of these for 1955, 1985, and 2015 time periods.  The goal of the game is use the characters from the back to the future movies; Marty, Doc, Jennifer, George, Lorraine, and Biff.  To meet the goal cards and have those characters present in the correct time period. 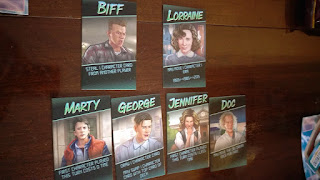 You accomplish this by moving the DeLorean back and forth and assigning each character to the correct time period.  The playing deck holds character cards that are individual character, dual characters, have a time cost, and a ripple cost.

Each player has a print copy of the Hill Valley Court House Clock and will use that as their respective play areas.  You pay an energy cost to move the DeLorean between time periods  and then pay a time cost for playing your cards.  The cards then have a secondary cost as well called Ripple.  In 1955 the ripple cost is 2 cards that you must discard to play an active card in your play area.  Meanwhile the ripple is only 1 card in 1985 and 0 card in 2015.  This make it cheaper to play your cards in 2015 and more expensive the farther in the past you go.  On the flip side when you end your turn and draw new cards you draw 2 in 2015, 1 in 1985, and 0 in 1955.  Also as you finish Quest/Objective/Mission card in a time period you score points.  The point value go up the farther in the past you complete your mission.

This leads to some careful consideration of where to move the DeLorean and how to play your cards.  You play it easy with low cost and quick card play, but you may be helping your opponents as well.

It does play quickly and only took us around 45 minutes per game after our initial play through to learn the game.  Which even that first time was only about 1.5 hours.  My wife, who loves everything 80's, love the game and I see us picking up a copy in the near future.  Regularly it is $34 on Amazon but right now it is on sale for only $23.52, so we may be picking up a copy fairly quickly.

Posted by Grayranger at 4:06 AM