During our yearly vacation, we try to play as many games as possible.  In our younger and child free years we played mostly RPG's especially Dungeons and Dragons (various editions) but as we have gotten older we have moved on to more board games.  They take up less prep time and we can jump in and play.  Last year we tried out Zombicide and found that we really enjoyed the game but it was almost impossible to win.  The reason we had so much trouble was that we were only using half of the provided zombie walkers.  Trust me it makes it much harder since you run out of zombies very quickly.

This year we thought that Zombicide:  Black Plague would be a fun version to try out.  Where the original and its expansion take place in a more modern setting this one is straight out of a Middle ages Fantasy setting, as evidenced by the Dwarf Warrior and Wizard on the cover of the box.  I really liked the variety of characters to choose from and the character card/tray is a big improvement over the original version of the character card that just had an XP slider on the card.

The game has you investigating the sudden rising of the dead and what these necromancers have to do with the zombie apocalypse.  We found that our group could easily handle fairly large groups of zombies and that we really only had to make sure we kept together and kept the zombie population on the board manageable.

Just like in the original version of the game, your number of actions and how you allocate them each turn in key to your survival.  You need to move, search, and find equipment so that your attacks are more effective and you are able to mow down the zombies.  As your character collect objectives and defeat baddies then you will gain experience and more bonuses and actions.  Reflecting how your character improves over time. 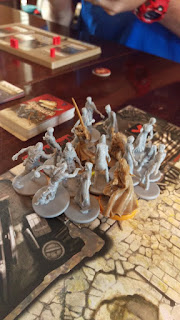 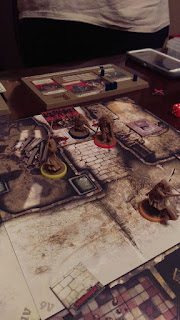 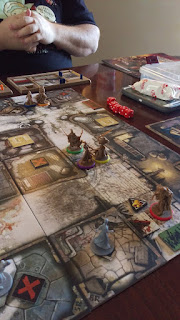 I do like how you can add the colored base to the model to make it easier to see which model belongs to which player.  The game played quickly and was much easier than the original version of the game.  We managed to take out a group of 15+ zombies with good use of spells and the dragons fire area attack.

the base game is currently available on Amazon for $63.00 which is not a bad price for a game with all the models and pieces that are included.  Over all we enjoyed this game but found it easier to play and more forgiving than the original Zombicide.

Posted by Grayranger at 8:33 AM