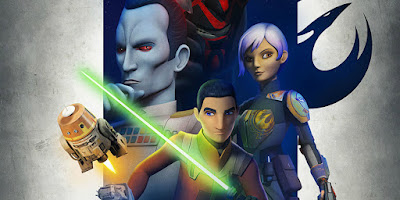 I have been a Star Wars fan since the day I went to the drive in movies with my dad to see Return of the Jedi as a kid back in 1983.  Like a lot of other people I was enamored with the idea of a space opera and all the sights sounds of aliens, alien worlds, star ships, and the world that George Lucas brought to life on the big screen.  So dad and I went home from the drive in theater and it was all i could talk about...that is until he told me it was the third movie of a trilogy!  There were two more I movies that I hadn't even known existed!

Skip ahead several years and a few hundred times of having watched the original Star Wars trilogy and I come across the Timothy Zahn's "Heir to the Empire" in 1991 and boom, mind blown again!  Not only do I have the original films but a whole written universe that approved by Lucas himself.

My love for all things Star Wars has continued to grow.  Through the release of the prequels, various video games over the years, the animated Clone Wars Shorts, and eventually with the animated Clone Wars cartoon (which is fantastic!).  I was heart broken to learn that the old novels were no longer going to be canon after the Disney purchase...but found my spirits lifted with the announcement of new movies and a new animated series!

Now three seasons into Star Wars Rebels, all I can say is wow!  I know it sounds totally cliched and I have several friends who are not fans of the new series and feel they were betrayed by the cancellation of The Clone Wars series.  I understand the necessity of the change by Disney, but I miss the stories and characters so much!

Well Disney brought us one of our favorite clone troopers last season, Rex.  Then our favorite ex-Jedi apprentice Ashoka Tano was revealed to be in the show!  Now in season 3 we have one of Timothy Zahn's best characters brought back to Star Wars canon...Grand Admiral Thrawn!

Warning some spoiler below

We find ourselves some time after the events of the season 2 finale.  Ezra has grown and stepped up in a much larger role in the rebellion.  While Kanan has withdrawn and secluded himself from this friends and allies.  The team is conducting a prison break of our favorite scoundrel Hondo.  It looks a bit bleak as the prison break goes sideways, that is until Ezra breaks out some very disturbing force puppetry with the Storm troopers and walker.

I won't do a blow by blow of the episode but we are shown a darker Ezra who is willing to do what ever is necessary to safe/help his friends.  A Kanan who discovers a his lost sight..sort of.

I enjoyed the episode.  The physical changes in Ezra were a little jarring but by the end of the episode it didn't phase me anymore.  For me though the highlight was the introduction of Grand Admiral Thrawn!  He is finally part of the new Star Wars canon and I can't wait to see how his role plays out over the season.  We left of with a more upbeat ending but it was a bitter sweet victory and as the Empirials stated, The rebels fight so hard for such little gain.
Posted by Grayranger at 6:01 PM