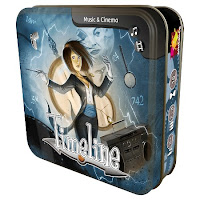 Last Christmas a friend of mine brought over a card game to my mothers house while we were in town visiting for the holidays.  It was a small metal tin called Timeline.  The version he had was American History and we had blast.  The game is composed of a small deck of mini-sized playing cards that have pictures and the name of an event.

My wife and I picked up Timeline Music & Cinema.  So you get cards that have everything from classical music all the way to recent top 40 hits on the radio.

To play the game you are dealt a hand of cards.  You win by getting rid of all the cards in your hand.  This is done my taking turns around the table placing your cards where you think they occurred on a timeline you set up on the table.  For example you deal everyone playing the game cards then you draw one card, we will use Star wars Episode IV A New Hope, with its release date of 1977.  Now the next player will place another card either before 1977 or after 1977.  Once the card is placed they flip it to the other side which has the same artwork and name but also includes a date.  If the player chose correctly the card stays where it is placed.  If they chose incorrectly the card is moved to the correct place on the timeline and the player draws a replacement card.  As you can see the game is easy for the first round or so, but as your timeline starts to fill up it quickly get more difficult.

As i wrote earlier, the winner is the first one to empty their hand of all cards.  The game is easy to set up and plays very quickly.  We had one game over in less than 10 minutes, my wife knew all the music dates she had in her hand.  While we had another game last 30 minutes, we didn't have any clue when Ride of the Valkyries was produced!

With the game being less than $10.00 on Amazon, it is relatively cheap, but be warned, you will find yourself wanting to pick up some of the other versions! 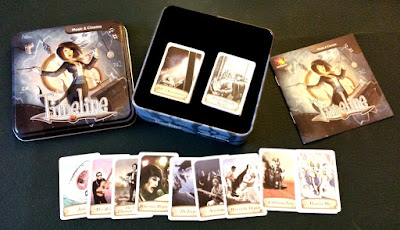 Posted by Grayranger at 8:14 AM