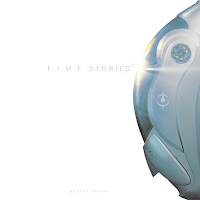 Since we have started playing more and more board games, I have been reading about various games online.  T.I.M.E. Stories has come up time and time again with each review singing its praises but remaining vague about the game itself.   Claiming that the persons didn't want to spoil too much for others.

Now having purchased the main game and its story Asylum, I understand what they meant.  The game intriguing and kept us on the edge of our seats as we worked through the story.  You are a T.I.M.E. agent in the future and you are sent back in time to specific location to find out what is causing an anomaly and then fix the problem.

The game comes with the Asylum story and you as the player are sent back into a vessel.  Its like, the TV show Quantum Leap.  You are occupying someone else for the course of the adventure.  So you have that characters abilities and drawbacks.  You then explore the environment and interact with characters in the game.  It is a who-dun-it, you have to figure out what is going on, who is involved, and how to stop it.  All this with only 60 time units for a 4 player game that can be spent.

The good news is that if you die, fail, or run out of time units you get to come back and try again.  The downside is that it is all set and you are faced with the exact same problem.  So the more you fail the better you should do next time, at least until you complete the scenario.

Once you complete the scenario you are introduced to the game mechanic where you gain a boon in the next upcoming mission.  The level of the boon is equal to how quickly and how well you competed the Asylum mission.

I would recommend you follow the instructions about how to handle each card.  It helps create the atmosphere and makes you feel more like you are in a fictional story.  Specifically that only the player that is attempting to inspect/look at something is aloud to read the game card.  Then they are permitted to relay the information.  For us one of clues was a picture and we had a fun time with the player describing what he saw!

We enjoyed the game.  It was new and exciting.  We did find ourselves frustrated with one of the riddles but eventually solved it.  With that solution we were ecstatic about finally finding the solution!

With the game game priced around $50.00 on amazon, it is worth picking up.  Just be prepared that it won't have a lot of replay ability once you complete the mission.  They designers want you to move on and get the next mission.  We have already pick up the next scenario:  The Marcy Case (1992) and can't wait to try it out. 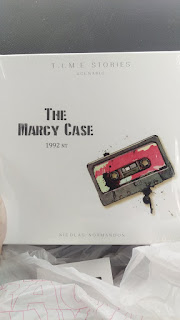 Posted by Grayranger at 5:31 AM