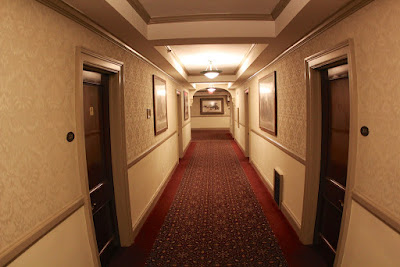 When we left off last time.  Our soon to be heroes had retreated to Al's hotel room on the 10th floor.  Taking a few minutes to calm down and accept the weirdness that occurred on the convention floor, they began to study the "magic glowing" stick they had taken for the Satyr guys calling himself "The Locus".

When ever Simon or Al would hold the staff, it would emit a faint blue glow.  Despite several attempts to make it do something special (besides glow) it remained an inert glowing stick well into the wee hours of the night.  The flashing lights of the police and emergency service vehicles were still visible from the hotel room window all night.  Al and Simon stayed up late discussing what happened and trying to figure out what to do with the stick.  At one point, Al looked at the hotel room clock and realized that it should be dawn.  Yet the sky outside was still pitch black and the flashing lights at street level were still shinning brightly.

Our heroes then checked their cell phones and room phones, which had no signal and the line was dead respectively.   Their next course of action was to go the elevator, which was no where to be found.  Then they went looking for the stairwell, which was also missing.  They discovered that the entire hotel floor was self sealed and they couldn't find any way off the floor.

It was then that they started to worry.  they went door to door and woke up all the other people who were staying on the 10th floor.  Once everyone was awake and gathered in the hallway, there were 31 people including our two heroes.  One of the other guests, suggested they try to break through a wall or break out a window and yell for help.  They discovered that the walls and windows were impenetrable.

Over the course of the next three days it became clear that they were in serious trouble.  The taps in the bathrooms were working.  So they had plenty of drinking water but they were almost completely out of any food that may have been in the rooms when they became trapped.  Al and Simon suspected that the glowing stick was responsible but were unable to get it to react to any stimuli.  They started passing the stick around to other people to see if that might help.

The youngest person trapped with our heroes was a 13 year old girl named Allie, who along with her mother Janice were the next to last people to be given a chance to wield the glowing stick.  On the morning off the third day of being trapped on the hotel floor, Simon handed the stick over to Allie.

The ground began to shake and the glowing light blossomed around Allie in a similar fashion to what happened with the The Locus (or middle aged Satyr Man as the players now called him).  The glow enveloped Allie and an impossibly strong force pressed Al, Simon, and Janice across the room.

One of the other trapped hotel occupants named George took that moment to reveal that he could turn his fingers into razor sharp claws.  George turned to attack Simon, who was in his way, so that he could get to Allie and kill her.  George had deduced that she was the cause of the whole "trapped on the hotel floor" problem due to how the "magic stick" reacted.

Three days of trapped boredom turned in a chaotic 40 seconds at 9:24AM.   Allie shrieked an almost inhuman sound and screamed "Finally, I am free!" and disappeared in a loud pop.  George slashed out at Simon at the same time that Al smacked him over the head with his Darth Maul lightsaber cosplay prop he had kept from the convention hall 4 days prior.  Just as George slumped down to the floor, Swat team members swarmed into the hotel hallway, followed by men wearing FBI vests.

The adventure ended with Allie and glowing stick missing.  George in police custody for assault.  Simon and Al trying to comfort Allies mom Janice.  While the police say the hotel floor had been empty for 3 days and all the people suddenly appeared around them just as George was rendered unconscious.

Posted by Grayranger at 9:02 AM