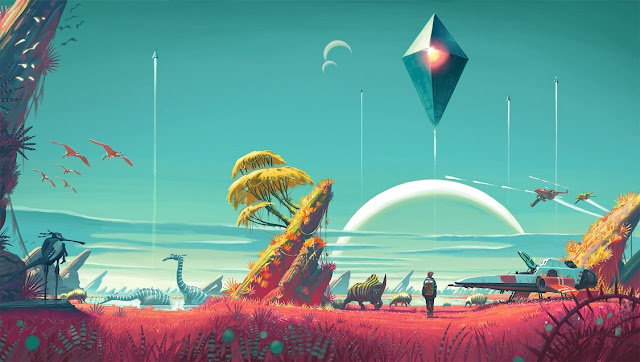 I have been casually following the pre-release information about a upcoming game, No Man's Sky.  The game was being touted as a procedurally generated game universe similar to Elite:  Dangerous.  Basically you can explore in any directions and the game would have planets available to more fully explore on top of flying a spaceship around the galaxy.

The game is developed by Hello Games and initially scheduled for release on PS4 and PC on August 9th, 2016.  I don't own a PS4 so I was forced to wait until Friday August 12th since the PC version of the game was delayed.  I purchased my copy on Steam and have been waiting for it to be available to download and play on Friday.

The game is a action survival game.  You begin all alone on your own private world where your space ship has crashed and you must gather supplies to repair your ship and keep yourself alive.  When the game finally loaded and I was greeted with the sweeping view of the area around my ship, I was impressed with how pretty the graphics are for the world.  Bright vibrant colors with the light appearing to change depending on where I moved and how much shadow was being cast by the flora around me.

I struggled with the user interface at first and had to reference the controls section of the menu to remind myself what keys to what.  I also completely missed the part about holding down the key or mouse button for a couple of seconds to fully select the option I was trying to complete.  I was also a bit overwhelmed at first about where to start, so I just started walking around and around shooting things with my mining laser.

Eventually I fixed my broken scanner and started scanning items to add them to my personal library.  Once you have scanned something you can then upload it to some central library and they pay you credits for your effort and you get to name that object forever more!  Including the planet you are walking around on.  I had a lot of "Weed-00X" named plants.

After wandering around for about an hour and half, I got back to the important job of fixing my spaceship.  Now I just need to find more fuel so I can get off this rock and check out space!  I will keep you all updated as I get a chance to play more.

Posted by Grayranger at 8:00 AM No comments:

Wearing The Cape by M.G.Harmon

You may not have been able to guess it, but I read a lot.  Sci-fi, fantasy, military fiction and even a bit of Stephen King, it doesn't matter I like them all.  Several years ago while traveling for work I found a copy of Wearing the Cape by M.G. Harmon.  His novel is a story of Hope Corrigan and her transition from regular every day college student to a costume wearing superhero.

The adult Superhero Fiction was something I discovered with  Wearing the Cape and now find the stories his and other authors very enjoyable.  I don't have a lot of time to invest into getting back into collecting and reading new comics like I did in my younger days.  /so this genre of fiction is much more portable and slides into my reading list very easily.

Last year Mr. Harmon announced that he was creating a role-playing game based up his Wearing the cape series.  He put our a request for play testers via Google+.  I read his request and thought, what the heck let me see if  he will take me as one.  A few days later he emailed me with the specifics  and accepted me into his Google+ group for play-testers.  Being part of the process and seeing the book come to fruition has been very exciting.  I can't wait for it to reach the kick-starter phase.  Mr. Harmon is a very nice gentleman and has been very open and personable when discussing the game and novel content.  It has been fascinating to see how a RPG game book comes into the world.

Mr. Harmon is self published author who  created a delightful cast of characters and world that is I have found enthralling.  I would encourage you to try out his writing and if have a minute, go check out his website:


Posted by Grayranger at 8:30 PM No comments:

Once along time ago I played World of Warcraft.  It may be better to say that I played WoW to the exclusion off everything else, which almost lead to me getting divorce.  I suspected that I may have a problem with the game taking up too much of my time and it was confirmed on a raid night when a coworker called me and needed help getting his car out of a ditch, and told him to call a wrecker...

As I hung up the phone, I realized that I was in a hurry to get back to the raid and just ditched him (haha pun intended!) so that I could play an MMO with a bunch a relative strangers.  The next day I canceled my account subscription and didn't look back.

Now, 5 years later I have renewed my subscription and started playing all over again.  This time with a careful eye on the clock and making sure that I don't get too deep into the game.  So no raiding this time around, not even a little.

By the way last and only warning that I will have a spoiler or two listed below for the Demon Hunters and their starting area. 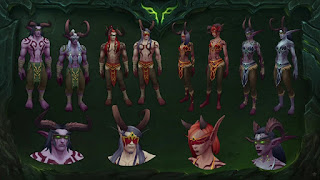 Tonight I just spend the last two hours trying out the pre-release of the new Hero class - Demon Hunters otherwise known as the Illidari.  I rushed though the character making process a bit and wasn't over picky about how I looked.  So now I have a very horny night-elf Demon Hunter with glowing eyes and tattoos.  I think she looks cool.  The story picks up several years ago at the Black Temple in Outlands, you are being sent on a mission by Illidian while a small group of Heroes from Azeroth are entering the Black Temple intent on killing him.

Illidian says it all cool and he's got this.  So you go take care of your mission.  You and a few of your demon hunter buddies enter the portal he opens and get ready to go slay a few thousand demons.  My first impression was that the demon dimension was beautiful.  In a were on a floating island sorta way.  Then I ran down the hill and jumped...and double jumped...and my character grew demon wings and started gliding down the slope!  I found myself thinking wow, i mean wow, that is totally cool!  Did I mention that you start at level 98?

The Demon Hunters start out in a DPS build but you can switch it up to a tank build as well later on in the starting area.  You spend about 2 hours running around helping your forces defeat demons and recover the Maltese Falcon...er I mean MacGuffin, dang it I mean Sargerite Stone.  I think it will be important later in the over all expansion plot.  Finally after you complete your mission, you return to find Illidian dead and you are quickly captured for your crimes of working for the dude.

Time passes and they thaw you out of the green ice to help repel the people breaking into your prison to steal Illidian body.  Of course you jump in and start killing demons, its sorta your thing.  next thing you know the Alliance is taking you in and you uncover a demon plot to ruin a funeral.

The addictive nature of the game aside, I really like the story and how it built upon events that transpired 4 expansion ago.  The Demon Hunters are very quick, mobile, agile, and take advantage of the environment like no other class out there.  I don't know if its enough to jump back into the game but for the time being I am enjoying hanging out with some friends and killing a few extra dimensional baddies!
Posted by Grayranger at 7:47 PM No comments:

A good friend hanging out Cryptozoic

What are friends for

Many years ago I noticed a cricket had gotten into my car.  The odd thing was,it was a very hardy cricket and survived for not just a day or so, but for about a year.  Every so often it would chirp and when I stopped the car I would search everywhere trying to find the cricket so I could get rid of it. This process went on and on and eventually I sold the car to a friend of mine.  Now with my cricket problem was gone and I moved onto to a new truck.  One that wasn't slowly driving me insane with a immortal cricket chirping all the time.

Eventually I flew home to visit my family and let the same friend who bought the car keep my truck while I was away.  A couple of weeks later I got back from my visit with family, and guess what?  The cricket chirping was back!  This time it was in my new truck.  I thought I was loosing my mind.  I looked everywhere in the truck for that stupid cricket but I never found the cricket.

A couple of years went by with that cricket randomly chirping and making me cringe every time it started up.   I was never able to find it and some how it lived through two years of weather extremes in that truck.  After those two years the chirping stopped.  The cricket must have finally died or moved on to haunt someone else.  During this whole ordeal I never told a soul.  I knew they would think I was crazy since no one else had ever been in the truck to hear the chirping.

several years went by and I eventually got a job with that same friend I mention earlier who had bought my old car...and now the chirping was back in my truck again!

I was surfing the web one day when I came across this item:

It is a device that can make a cricket sound at random intervals.  I went immediately out to the truck and searched it again.  I still didn't find any devices.  The next Monday I confronted my friend and co-worker about planting this gizmo.  He denied everything, but after that day the chirping went away for good.

This was many years ago and to this day the friend denies any wrong doings or planing this device or a similar device in my cars.
Posted by Grayranger at 5:32 AM No comments: