Posted by Grayranger at 3:34 PM No comments:

House Rules Episode 4 is up! Who you gonna call...for House Rules!

This week's episode of House Rules is up... Come check us out...

Posted by Grayranger at 4:17 PM No comments:

House Rules Episode 3 is up!  This week we talk about D&D 5th Ed Sub Classes!

Posted by Grayranger at 6:07 PM No comments:

Portrait of our Current D&D Party 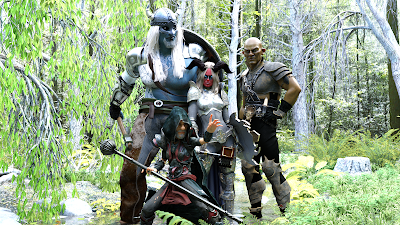 Posted by Grayranger at 3:00 AM No comments:

House Rules Podcast: Episode 2 is up!

Episode 2 of our House Rules Podcast is up:  Gloomhaven Monsters and Initiative.

Posted by Grayranger at 3:12 PM No comments:

I have a new pod cast that in which I contribute.  It is about house rules that you use for board games and Table Top roleplaying games.  If you have a few minutes, please check it out.

Posted by Grayranger at 4:48 PM No comments:

I backed the Trail Blazer Fantasy Game Stamps in the past and recently had the opportunity to play test a new set of stamps for the Traveller RPG.  Specifically stamps that are used to map Sub-sectors of space. 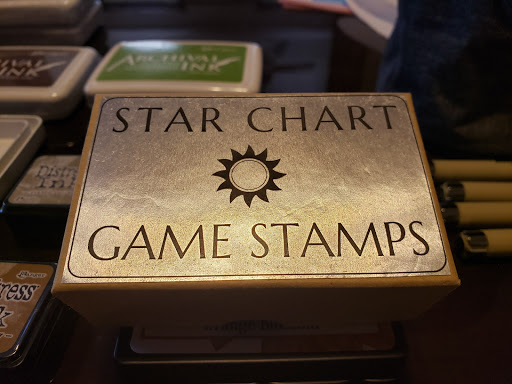 Questions from the Play Test Instructions:

1.) Did you enjoy using the stamps and stencils?

I like the stamps but found the stencils required more skill than I currently have to create a “good” looking effect.  It will take more practice on my part to get to where I feel comfortable using the stencils on my maps.  Right now, it is easier and cleaner in appearance for me to draw my routes by hand and use pre-printed hexes.  I am going to work on the stamps some more next weekend.

2.) Are they a useful tool for mapping a sub-sector?

The look of your stamps is fantastic and really helped me draw my fantasy maps.  I could create good maps with ease and speed.  This makes up for my own lack in artistic ability to draw fantasy maps.  The Traveller maps work similar.  I use either Traveller Map or IOS app sectors to draw and print my maps right now. IOS Sector Map App (see pic below).  The stamps are not quicker, but create a unique looking map.  I plan to use the stamps for my home brew and Trojan Reach campaigns. 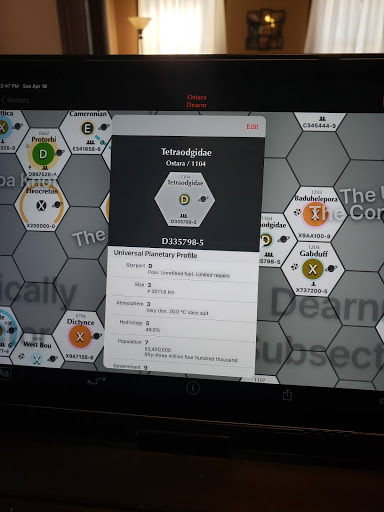 3.) Which stamps seem essential, and which (if any) would you omit from a basic set?

First off, I love the LED stamp and would like a larger version of it.  It was a surprise how much I like using it.

In summary, the only stamp that felt out place was the Star Field.  For a basic set you may want to consider the Star Burst, and planets, and bases.  I would add the skull in with a second set or as an extra.

4.) Were the guides adequate?

I followed the guides example of using solid and hollow version to denote the presence of water and/or atmosphere.  I am an old school Traveller van and had little difficulty using the stamps to align with the generally accepted charting and mapping keys.  It may be useful to provide a “recommend” map key for those that are less familiar with Traveller map symbols.  I have always liked an overabundance of graphic examples to come with instructions.

The stamp guide was very easy to understand and since I was familiar with the fantasy stamps it translated easily into using the new stamps.

The stencil guide was little more difficult for me to follow.  I had not used your stencils for the fantasy set and it took me awhile to get a handle on how to use the blending tools and stencils.  Even then I had a hard time getting a consistent look on the paper.   I found myself referencing the guide frequently.

I almost missed the water-based Ink part vs waterproof ones for the stamps.  If you had not mentioned it specifically in Facebook messenger chat, I would have rushed in and used the wrong ink.  I did not read the guide well enough and was eager to jump in and start testing.  The guide is well written and spells it out, I was just in a hurry and didn’t give it the attention it deserved.

I am going to include pics and some notes that we discussed via Facebook messenger.

My Setup and paper used: 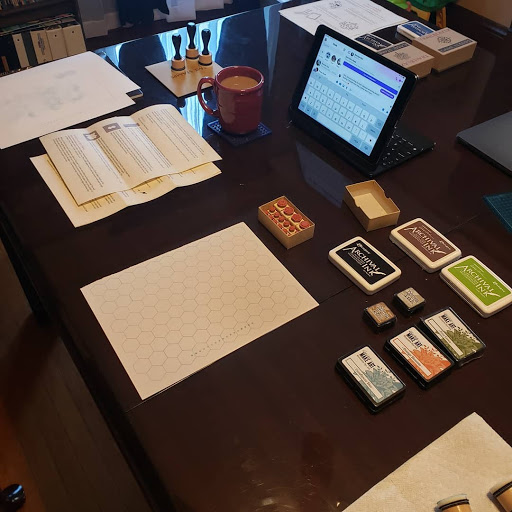 Pics of my stamping: 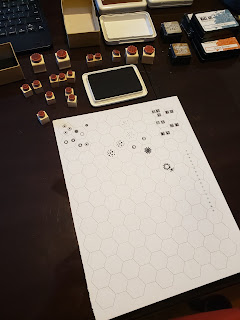 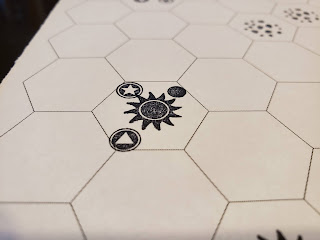 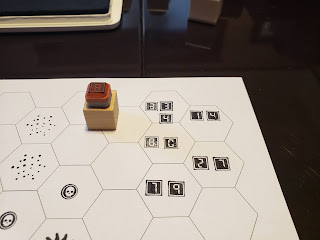 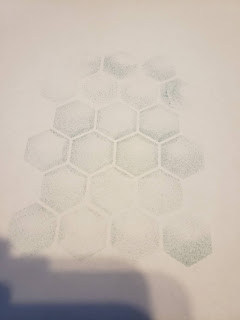 Posted by Grayranger at 6:03 AM No comments:

2020 was an interesting year, below is a list of events that occurred this past year:

Traveled with work to Arkansas 1 time, which is 4 less that last year.  I am going to count that one as a win!

My son is now 6 years old

Our ongoing Marvel (FASERIP) campaign on Roll20 has been retired due to a death of one of our friends.

Thing that I didn't get to do this past year but want to change in 2021:

Slacked off on my blog for the past couple of months.  I got very busy with work, and I know, excuses…excuses.

Take my son to the Zoo, he still wants to see an Aardvark!

Just so I can be like everyone else at New Years, loose about 20 lbs.

Continue playing D&D online and hopefully get to play some board games in person again!

I know its quick and just a list of experiences but I feel better getting them down on paper.  I do have a few game reviews that will be coming up in a couple of weeks.  I promise!  I also am going to strive to be more regular with updates, and share more of my thoughts and stories.  Happy New Year!

Posted by Grayranger at 11:52 AM No comments: