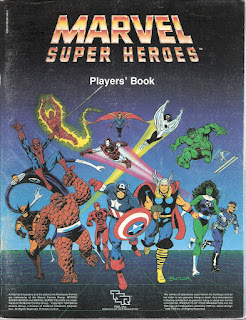 I have recently started a ongoing Marvel Superheroes campaign via Roll20.  I don't have much experience with using online platforms for my RPGs but this one has been a great experience.  It is a small group of only two players.  Our play time is short (about 1-2 hrs.) and sporadic as to when we can actually play.

I am a huge fan of Modern Superhero fiction that has grown in popularity over the past several years.  I decided to approach this game with a similar mentality.  The most common method of how the authors approach these worlds, is to present these super powered individual in a fashion that is very close to our modern world.  How would the governments react to people who develop powers?  How would the world be shaped by those same people?  It is an exciting prospect to consider, and to see how my players are going to react to those changes and how those actions will affect them and others around them.

The world in which my player live is just like the real world we all live and play in today.  The playera also chose a very non-traditional way to generate their characters.  They wanted me as the GM to roll up the characters and only reveal powers and abilities as they came into play during the story.  I would like to stress that they wanted me to roll them up and not just create what I thought would be cool for the story.

I went a bit farther and set up a couple of pre-game session with Roll20 so that each of the two players could do the actual virtual rolling in the interface and I would then compare rolls to the Ultimate Powers Book and Player's Book as appropriate.  The players then created a very brief origin and background.  I plan on sharing the team's ongoing exploits on this blog and i hope you all enjoy our antics as much as we do during the course of the game.

Now that we are a few session into our campaign, and the players have been exposed to their characters powers.  I am sharing the characters stats below:


...and up next we have my other players character: