We had family in to visit for New Years weekend.  So of course it was a good opportunity to pull out a few games and give them a try.  Personally I have only played the basic set of Munchkin in the past.  The game is fun, quick, and comical.

This version is all about Pathfinder, one of D&D 3rd Edition spin-offs.  Just like the other munchkin games you play a hero who is out to reach level 10 and win the game.  You then take turns exploring and fighting monsters and gathering equipment.  You can gain a character class and equipment that will make you strong enough to defeat the various monsters you draw or have played against you via the other players.

Our four players managed to get in two quick games.  One of which I won and the other being by stepson's girlfriend. 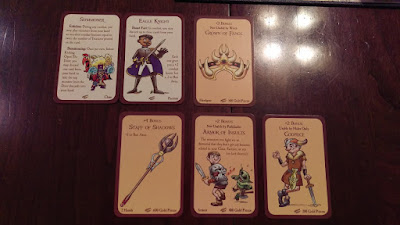 The game was fun and and fairly cheap, we picked up a copy at our local game shop for $20.00.  If you are a fan of Munchkin and Pathfinder, its a good buy but if you don't care for the pathfinder then you may be better off with the original Munchkin or one of it many and varied spin-off versions.