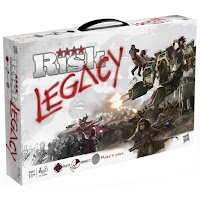 I am a huge fan of Risk by Hasbro.  I remember learning to play with my stepdads brother and some of their friends when I was kid.  Of course back then I lost, very quickly, but over the years my understanding of how to play the game has improved.  For example gaining territory in the early game vs card management for reinforcements in the late game will make or break your chances to win the game.

As has become more and more common for me as an adult, I wasn't even aware that Risk Legacy existed until it had be released for mare than a year.  I was talking to some of neighbors in the office next door to my work when they mention playing the game in the evenings.  My curiosity was piqued!  They told me the game had specific factions, the board could evolve/change, and players could destroy parts of the game!  These are all radical ideas for a game that has been around since 1959.  At lunch that day I went to our local hobby/game store to pick up a copy.

Two days later I had search two game store, two different Target locations, Walmart, Kmart, local specialized hobby shop, and Amazon..everywhere was sold out, even Amazon!  As my last resort I called a friend 300 miles away in another state and asked him to go check out his local game store.  He called me back that afternoon and they had a copy of the game on the shelf and he had picked it up and it was in the mail headed my direction.  I will keep this review spoiler free of what happens as you play the game.  I will only post a few items that you will encounter when you open the game and some of the mechanics that you encounter that are different than Standard Risk. 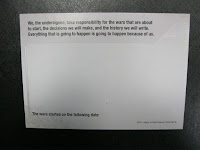 It was amazing opening the game for the first time and seeing the warning label on the box "NOTE:  What's done can never be undone." and then when we removed the board from the box there was a place on the back of the board to sign and take responsibility for what transpires during the game.
The game consists of a plastic insert that hold the different armies that are available to play, each has its own specific color molded models for single army units and the multiple army unit, attack and defense dice, faction cards, and assorted playing cards that are used during the game.  The rule book is unique in that it has spaces left black that are intended to be filled in as the game progresses.  For example you play the first game very similar to how classic Risk is played but depending on how the game progresses you can open new packets that contain rule changes and other "flavor" items. 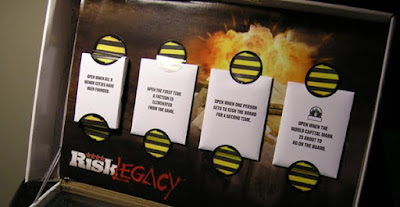 The first thing each player must do is select a faction to play.  The factions are black cars with a little bit of art work and room for rule additions just like the rule book and board.  You are then instructed to select between to faction abilities and add the one you choose to the faction card.  Then DESTROY the one you don't select!  I was horror struck, you don't tear up parts of a board game.  It was heart wrenching to tear up that first card.

As I said earlier, game play for the first game was very much like classic Risk.  Once the game was complete though we were introduced to one of the new facets.  The winner of the game was able to select a victory reward and the surviving players were also able to choose a minor award.  Each of these awards carried over into all the games from that point on.

The game is intended to be played for a campaign of 15 games.  the winner of each of the 15 games gets to sign the board and select one of the available victory rewards that will shape the games to come. 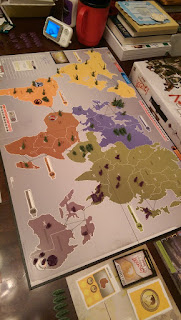 
As I said earlier we love the game and have since bought a total of three copies.  Our first one is on game 12 and we only play it when one group of friends are together.  The second copy is one that can be played by anyone that may be over visiting and its on game 10.  The third copy is packed away and being kept for our son when he gets older.  Our plan in wrap it as a present and put a check list of item he has to complete prior to opening, such as play a certain number of classic risk games with Mom and Dad and few other items along those line.

As you can probably tell by my review, if you love Risk then I highly recommend picking up and playing Risk Legacy.
Posted by Grayranger at 7:27 AM