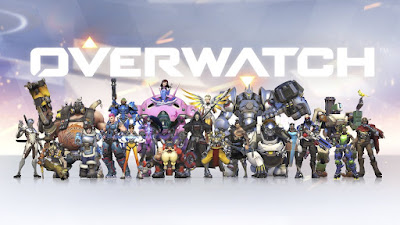 This past weekend I pick up a copy of Blizzard's new game Overwatch.  In all fairness and full disclosure I spent a lot of time sucked into play World of Warcraft several years back.  I love the feel of Blizzard games but hate how they become huge time sinks, as my family and work responsibilities have grown my time for video games has been reduced.

Before playing Overwatch, I had only heard a few things about the game second hand from few friends of mine.  The usual mix of opinions, couple of Blizzard fans where any game they produce can do no wrong, and the flip side Blizzard haters.  I have played a lot of 1st person shooters over the years as well and to be honest I was excited about the idea of a Blizzard shooter.

After the game installed on my Xbox One, my first impression is wow, this is a pretty game.  As I have seen with the newer console games you have to install the game even when you purchase a game disc.  This took about 35 minutes to accomplish but you didn't have to wait for complete installation to start checking out the game.  The tutorials and practice level became available fairly quickly at ~10 minutes into the installation.

The match making was quick (all games <30 seconds to find).  I quickly found a couple of character that I enjoyed playing and kept circling back around to them during the matches.  Also one of the aspects that I really enjoyed was the voting at the end of the match for the MVP of that match.  In a move that was very refreshing, the award went to primarily the support and healing classes and not just the person with the most player kills.

The last item I would like to touch on is that as I played the game, I found it was an easy to play and fun to play start.  Though as I kept playing some of the characters I could see how a meta game was evolving from the character abilities, such as being able to drop a wall of ice and control the flow of the movement on the game map.  A group of experienced players can be almost unbeatable with the right collection of players and abilities.  All in all I found it a fun game and would recommend it to others for the same reasons as I have listed above and below.  Keep in mind it is an online only game is cost ~$60.00 right now.  I am curious to see if it has real staying power and keeps a good amount of active players as the game ages.