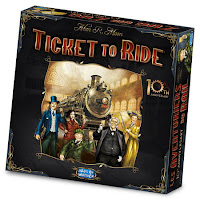 I have been told by many of my friends that I need to play Ticket to Ride, published by Days of Wonder back in 2004.  When stopping by the local game store I would pick up the box and consider buying the game but usually my attention and money would be drawn away by the newest and lasted game release on the shelf and Ticket to Ride would remain at the game store.

Well a couple of weeks ago, that all changed.  I finally decided to bite the bullet and pick up a copy and since I was going all-in, I decided to pick up the 10th Anniversary Limited Edition of the game.  My local game store didn't have a copy of the 10th Anniversary Limited Edition so I turned to the other great game resource.  The mighty Amazon!  With the order placed, the game was at my home a couple of days later.

My first impression was that it was a very large box and when I unpacked the game materials I found that the game board was also very large and impressive.  the The instruction manual was also intimidating at first and looked to be about 30 pages long or so...then I opened it up and discovered that only the first 4 pages were in English.  All the other pages of the book were in various other languages.

Next came the individual tins that held the player pieces.  This was striking as well since each one was printed in a primary color to distinguish between player and once you open the tins you say the rail cars were unique for that player.  One had a wooden tanker car, another was a coal car.  Each of the six not only had a specific color but it was cast/made to look unique in comparison to the other cars.

After reading the directions, we started play and it was straight forward.  You attempt to complete as many routes from city to city as you can, as well as complete "secret" routes for extra points at the end of the game.  The simple  form of play was a bit deceiving, we found that you could infer a lot of your opponents plans by how they set up and placed their pieces.  We found ourselves working to disrupt each other plans and derail any hopes to score the "secret" routes.

I was only able to play a two player game for my first foray into Ticket to Ride and can't wait to play a larger game and see how it affect game play strategies and length of play.

* Large board size is visually appealing and easy to place rail cars onto the board.

* Quick set up and ease of play, First game was only 24 minutes long for a two player game.

* Deeper meta-game than is apparent at first.

* Large board size only fit on my dining room table, it was a bit big for other tables in my house.

* Some of the player cards are similar in shade and it make it hard to tell the difference at a glance, for example the Red Line cards vs the Pink Line cards are very hard to recognize at first, unless one of each is face up next to the play area.

* Price is approximately $70-$80 for the 10th Anniversary Edition.  I have paid that amount for some of the strategy games in the past but it seemed like a lot to me and my wife.

Ultimately it was a fun game and I look forward to some more rounds of play.  I really want to try some of the optional rules provided with the game and see how a larger game plays with more players.  I recommend the game to other groups and I think it would be a fun game for family game nights!

(Just a "to be fair" disclaimer, I shamelessly stole the pictures I have used in this review from Google Image search)
Posted by Grayranger at 8:00 AM