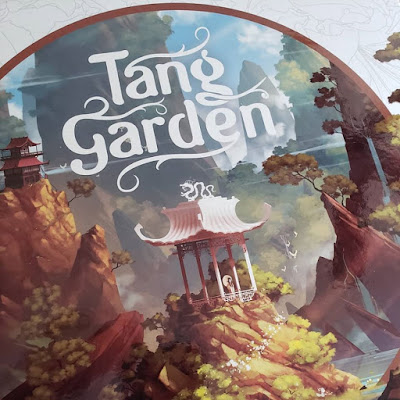 I recently received My Kickstarter copy of Tang Garden from Thundergryph Games.  The company website states that "Tang Garden is a Zen-like game that will take you to the first golden age of China."  That is an accurate description of the game.  A one to four player game where each player takes on a character (Soldier, Hermit, Emperor, etc) each with different abilities that can affect the in-progress game and possibly the final game score. 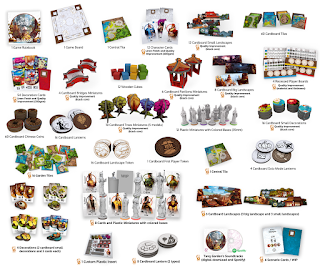 I will start with the contents of the game box.  The amount of parts and component for this is game is astounding.  you get the game board, tiles, and more tiles, trees, pagodas, bridges, and then to top it all of...minis of each character!  You might think that the with this many components that they might have gone cheap on quality...I say Nay!  The punch out components are thick and sturdy.  As are the impressive pagodas and bridge (some assembly required).  The mins are small but well made.  I am not one to paint all my game minis, but I imagine that these would look very nice when painted.

We read the manual and sat down to figure out how to play this amazing looking game.  This is where the Zen claim was put to the test.  We had a zero session, that lasted for over an hour and had to be called due to frustration with understanding the rules.  The rule book looks nice, but despite several examples in the book, it was vague on several aspects of the game mechanics.  So we decided to call it a night and try again the next day. 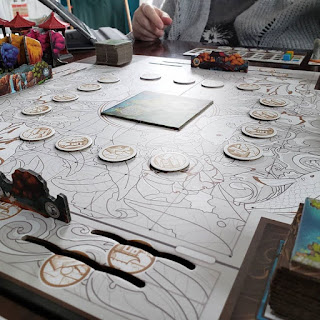 With a good nights sleep and a couple of hours of digging into the game online, big thanks to the folks over Boardgamergeek and their assistance, we started our second game of Tang Garden.  I even broke out the music sound track provided during the Kickstarter.  The second go-around went very well, the game took around 2 hours but we did several rules checks and took our time deciding actions on our turns.  The game has several choices available each turn, you can choose and place a tile, decorate the garden, and depending on how your player mat progresses you may influence other characters to join you and/or place some of those nifty landscape backgrounds.

Over all we enjoyed the game and look forward to our next session.  The game is a tile placement, decoration placement, and a little bit of a worker placement (not really) game.  It offers several varied paths towards victory and a lot depth of strategy.  I would recommend game for any fans of slower pace and less stressful game of creating a beautiful garden.  I recieved my copy via kickstarter and the Thunder Gryph website show the pre-order is sold out right now, so I am not sure where you can currently find a copy outside of Ebay. 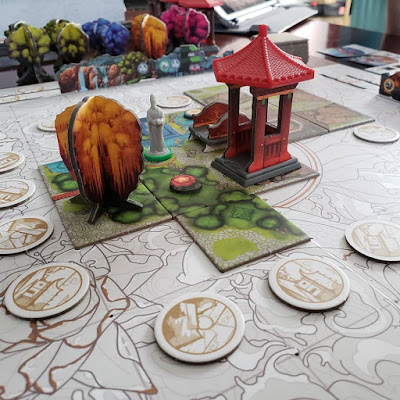 Posted by Grayranger at 6:49 PM