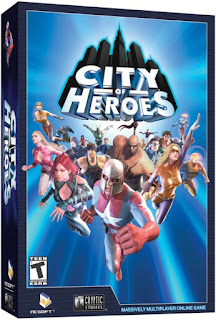 Way back in 2005 I went and purchased a copy of City of Heroes developed Cryptic Studios and published by NCSOFT.  Since I am big fan of comics, Supers, and MMORGP (Such as World of Warcraft) I though why not.  I installed the game and loaded up the character creation screen...and wow it took my breath away.  The options were varied, in-depth, and seemed limitless.  I spent an hour just working on my first characters appearance.

Over the next year I lost myself into the game and enjoyed many an evening of fighting crime and defeating villains in Paragon City.  I continued to play the game off and on again for the next several years.  I wasn't a big fan of the expansion City of Villains but it was a nice addition to the game.  I did enjoy reading about the roll out party that took place at Alcatraz in San Francisco for City of Villains, it was a cool idea to promote the new expansion!

Here is the Wiki article for those that are unfamiliar with the MMORPG:  City of Heroes Wiki

Then in 2012 Paragon Studios announced that CoH would be closing its doors for good and the game was soon to be shut down.  I had not been active in the game for a couple of years but it was terrible news.  I immediately went and reinstalled the game and logged back in to my old Rad/Rad character.  As soon as I was logged in, i received a whisper from an old friend who still played...he had kept my characters name in his friends list for two years hoping I would log back in...we had never shared real life contact info prior to me drifting away from the game!

We spent the evening reconnecting, talking about old times in the game, and sharing real life contact info.  It was great nostalgic evening that put me back in touch with an old friend.  Now skip ahead several years....

I kept tabs on some of the old forums and even some of the newer sources of info on the game, Reddit, Discord, and such to see if anyone had any interest in creating a private server of the game.  Over the years it was commonly believed that the source code was gone for good and for a private server to exist someone would have to complete redevelop the game.  Which wasn't going to happen anytime soon.

So this morning when I was checking out my old and new sources of info on CoH, out of habit, I found that last night an individual had released the server source code out into the wild of the inter-webs!

And, not only were the files released, but there has been a secret private server operated by this individual and a group called SCORE (stands for Secret Cabal of Reverse Engineers).  Another person going by the name of Destroyer Stroyer had been invited to the secret private server but felt it was wrong to keep it away from large and loyal following that CoH still has online in 2019.  So he made a video and revealed the existence of the server to the masses.

You can find the full story here:  City of Heroes Private Server Leak

The online groups have been going wild with this info for the past 24 hours!  I am going to keep an eye on what transpires and keep my fingers crossed that maybe I can play City of Heroes again one day soon.
Posted by Grayranger at 7:22 AM