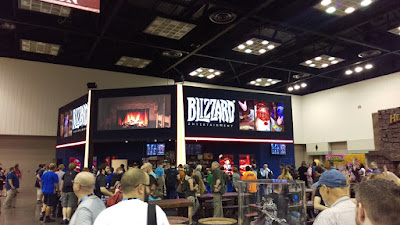 Ok, I did not attend Blizzcon...at least not yet.  I did attend GENCON 2018 in Indianapolis, Indiana.  I experience several high points of the years trip; playing Golden Sky Stories RPG, talking to Marion Harmon (The Wearing the Cape creator), meeting Jamey Stegmaier of Stonemaier Games, getting my little gnome hero for Hearthstone, and playing Runequest with Jeff Richard as our game master! 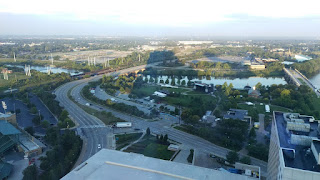 This was the view from our hotel in downtown Indianapolis.  This was our first year to secure a room in the downtown block of hotels...the best part we were easy walking distance to the convention center and all the games.  Our close proximity made gaming, eating, and sleeping much easier than previous years where we were forced to stay at least a 30 min. drive away from the convention center.

I only signed up for a few scheduled games.  My wife and I like to keep our afternoons and evenings free to meet up with friends (sometime strangers) and try our hand new games.  This year we tried several new games to include:  The Thing, Shipwreck Arcana, Campy Monsters, and Space Park.  On Saturday I even managed to play Blizzards Hearthstone in a Fireside match and get my Warlock hero!  I made it a point to seek out Mr. Marion G. Harmon, the creator of Wearing the Cape novel series and it's corresponding RPG.  He was fantastic and he was the person who directed to me the logic game of Shipwreck Aracana. Fantastic game Mr. Harmon, thank you! 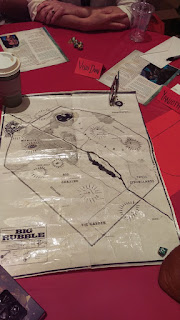 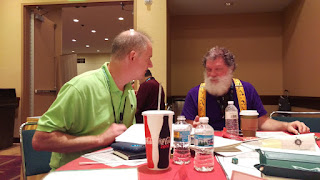 As I mentioned in the first paragraph, the highlight of the whole weekend was Playing the new Runequest:  Role playing in Golorantha with Jeff Richard.  The event ticket was expensive at $20.00 but well worth the price.  The adventure was tittled "The Trouble in the Big Rubble"  and we had a fantastic time.  I meet some fellow gamers who were awesome and loved Runequest as much as I do.  This was my first exposure to the new rules/edition and I found it close enough to 2nd Ed. that I knew my way around most of the mechanics and the other newer game material came easily. 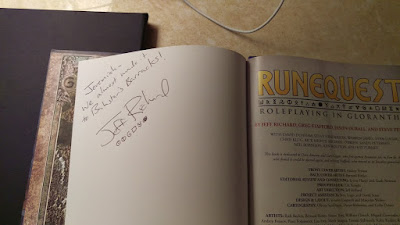 This was easily a weekend of memorable events.  Going with the Chaosium theme, i attended Sandy Peterson's "How to create a Call of Cthulhu adventure" seminar and wow was that informative.  Mr. Peterson has been kind enough to post the session on YouTube, if you are a fan of Call of Cthulhu, I recommend you take a few minutes and check out the video.  My apologies for the picture, but Mr. Peterson walked behind the camera and its the only one I remembered to snap. 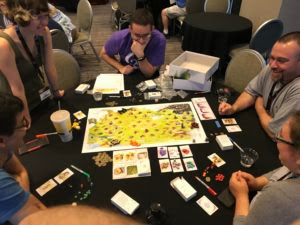 My wife and I also "Spent a night in Greengully" with Jamey Stegmaier of Stonemaier Games and the creator of Scythe, Chartertone, and Viticulture.  He is a wonderful host and took time out of his evening to sit with us and ask about the games and our experiences.  Once again, if you are going to GENCON and Mr. Stegmaier is attending, take time to visit his area and check out his selection of games.  You can even ask him about winning strategies.


Ok, those are the high points of the weekend.  We had a wonderful time and met a lot of great people and played some many many terrific games.  I am looking forward to next year...I just hope Marc Miller can make it next year and is willing to host his Traveller RPG:  Can you survive character generation!

Posted by Grayranger at 6:36 PM