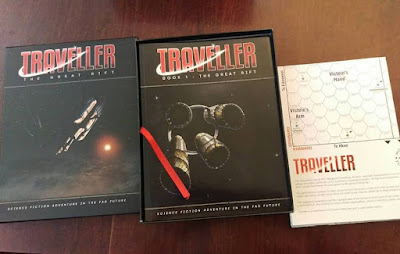 Today I received my copy of Mongoose Publishing's The Great Rift box set for the Traveller RPG.  I have been watching the development and impending delivery of this product on line with a great deal of excitement.

Mongoose delivered the PDF versions as they were completed but we have had to wait for delivery of the printed copies.  I have been very eager to see the final product.

It has been worth the wait.  The final box set is superbly constructed, it even has a small ribbon to help you get the books out of the box with out damaging either the books or the box.  Mongoose did an outstanding job of keeping all the backers from Kickstarter informed along every step of the journey.  My only concern was that as I read of US backers receiving their physical copies, I had not received mine.


I sent an email out to Matthew Sprange and he responded quickly stating that I should have received my copy already.  After verifying my mailing address Mr Sprange said that would see it in the mail soon.  True to his word it arrived 3 days later. I don't know what hiccup occurred, but he handled my inquiry professionally and resolved the issue quickly.

I have seen several articles and forum threads that disparage the cost of some of Mongoose Publishing products but I personally have not had any issue with any of the printed material and have been supplied with PDF version of anything where I have purchased a physical copy from an online.  source.

An exciting note is that within 24 hours of the PDF being released, the fan favorite web site,the Traveller Map had been updated with all the supplied material and content!  If you have not had an opportunity to explore the Traveller Map web site, it is well worth you time.  My favorite "easter egg" is the map of the Zodani Core Expeditions!
Posted by Grayranger at 10:01 AM