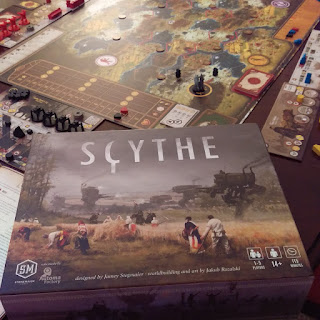 This game has been on my list for some time now, so this past weekend I picked up a copy of Scythe.  I have read a lot of Google+ posts about the game and most of those are very positive.  So I was eager to play, but family commitments worked against me and the game sat on the dinner table unopened for a few days.  My first impression; the box is heavy and the artwork is Amazing.

The game is produced by Stonemaier Games and created by Jamie Stegmaier and that "Amazing" art work by Jakub Rozalski.  The game was a successful Kickstarter back in 2015 and is now commercially available via many outlets.  We pick up up our copy from Amazon for $62.00.

Upon finally opening the box, we found detailed minis, wooden tokens, cardboard coins/tokens, double sided game board, rules books (yes two books, we will get to that in a minute), an achievement sheet, and about 30+ ziplock baggies of various sizes to hold all your minis and tokens.

With my toddler son "helping" pop out all the card board tokens, my wife and I were ready to set up and try to play our first game.  One of the pointers in the rules books says not to stress over the rules and do not attempt to explain all the ins and out to new players but to just "jump in and push the buttons and see what works", and after playing the game for the first time...I would agree with this statement. 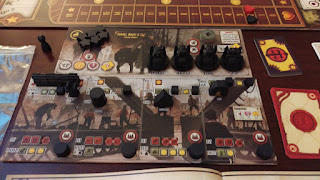 The actual game play flows very well.  The turn order is dictated by what player mat you are randomly assigned and then goes around the table.  You will have a faction mat and player mat assigned.  the order, costs, and rewards may vary between each faction mat and player mat.  Each turn you will choose one of four actions found on your player mat and you can't choose the same action two turns in row (unless you are the one faction that breaks that rule).

These actions will either move your character, mech, or workers around the mat.  While other actions will produce resources, trade for resources, or recruit people to help your faction grow.  Each action has it pros and cons during play and you will need to consider your needs in the immediate and long term of the game, to get yourself in position to play stars and win the game.  Each player is attempting to play 6 stars and thus end the game.  Once the game has ended you score; hexes, monuments, and several other criteria to determine the overall winner of the game. 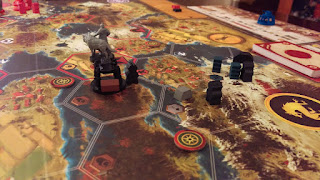 Each faction has unique abilities that break some of the established rules.  For example I mention earlier there is  faction that can select the same action turn after turn instead of being forced to not select the currently action for the turn.  For example if you select movement this turn, then you have to select one of the other three actions on the following turn.  After you have then done the new actions, you can move again your following turn.

The box and rule book state that the game should take around 115 minutes to pay but our first play lasted closer to 4 hours for a two player game.  In the games defense we did stop and watch part of a 30 minute Youtube video how to play, to clarify a question we had about resources.  Once thing we did notice was that the game was slow in the begging during our build up but accelerated as the game progressed.  So our last few turns flew by.

The last item I would like to touch on is that the game come with a second rule book just for playing the game solo.  Yes, the game is for 1 - 5 players.  I haven't had a chance to try out the solo play yet but I should get a chance soon and will update my readers with my impressions.  I recommend the game for anyone who likes resource management games with a healthy dose of combat. 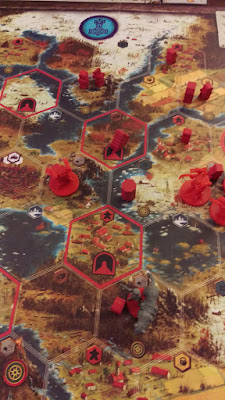 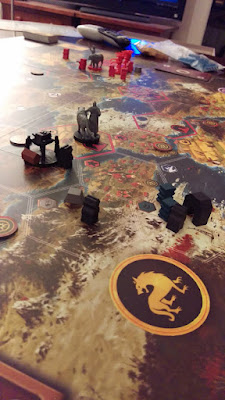 Posted by Grayranger at 3:16 PM