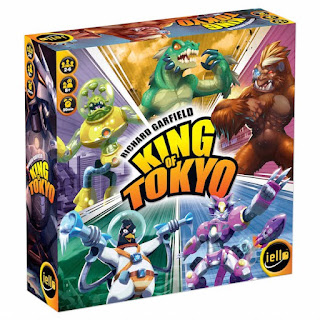 I recently got the opportunity to play King of Tokyo by Richard Garfield, and yes the same Richard Garfield that created Magic the Gathering!  The game is published by iLLEO and available for around $30-$40 depending on if you can catch a sale or not.

Game play is simple, each player controls a monster and attempts survive and gain 20 victory points.  VP are represented by lighting bolts on your character tile.  Your character tile also contains a portrait of your monster, your health wheel along with the previously mentioned VP wheel.

There is also a stand up portrait of your monster and a city tile for Tokyo.  Each player takes turns rolling 6 dice (good old fashioned 6-siders) in an attempt to roll claws (attack), Lighting (energy), or just the numerals 1, 2, and 3 for victory points.  You score extra victory by having your monster inside Tokyo but you are unable to heal while in the city.  Meanwhile outside the city you can damage the monster occupying the city and heal as you wish but in theory you won't score victory points as quickly.

You can win by either being the first monster to score 20 victory points or be the last monster standing.  I have seen the game won both ways and with the victory point win, I have seen the monster in the city win and a monster who had never "gone into" the city win.  The plays quickly and is fun, even in a 5 player game the dice come back around and you don't have to wait very long between rolls.

We have also played the game with the younger crowd and even my mother-in-law, who also likes the game.  I would recommend this game for those who enjoy dice-rolling games and want something that plays in 30-45 min. 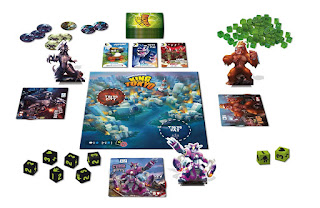