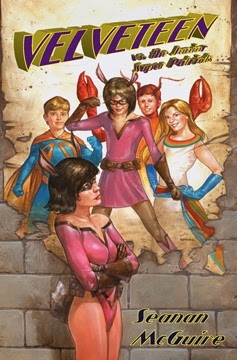 Seanan McGuire and her Velveteen series were flying under my radar when it came to superhero fiction.   Until I read Team-Ups and Crossovers (Wearing the Cape Book 6) by Marion G. Harmon.  In his book the main character is traveling across dimensions and founds herself in Seanan McGuire’s Velveteen universe.
I enjoyed the Velveteen chapters of Mr. Harmon’s novel and went to pick up the first of the Velveteen series.  I have had a difficult time putting the Velveteen books down.  Seanan has created a world where superheroes not only exist but they are strictly controlled by a corporation, The Super Patriots.  In this world our heroine has quit the team and struck out on her own and is just trying to live her life, but the Super Patriots have other plans.


The books are fun and entertaining to read.  The characters have an appeal that reaches out into our own lives.  Seanan has brought a wonderfully deep character to life and without the in-depth battle description that are the core of some of the other super hero fiction.  She delivers an entertaining series of books that are character focused and not all about the flare and excitement of super powers.

Velveteen vs the Junior Super Patriots