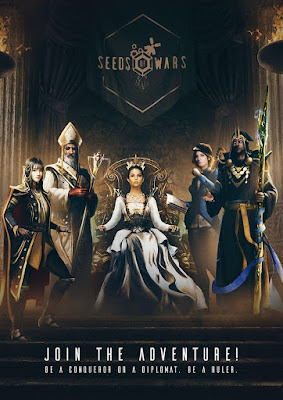 I am an old fan of the 2nd edition Dungeons & Dragons Birthright setting.  For those of you are not familiar with the Birthright setting, it was created by Rich Baker and Colin McComb under the banner of TSR in 1995.  The setting is made for the AD&D but with the twist that the characters have a divine bloodline that grants them the ability to govern and rule a Domain (country).  This setting has a rich history and detailed set of campaign sourcebooks for specific Domains that PC can control or interact with during the course of play.  Even though the game is long out of print it has a loyal fan base that have worked hard to keep it alive and relevant with each updated edition of D&D over at the Birthright.net fan site.  One of the challenges for this type of play is the amount of book keeping required for Domain upkeep of the PC realm and the upkeep of the neighboring realms. 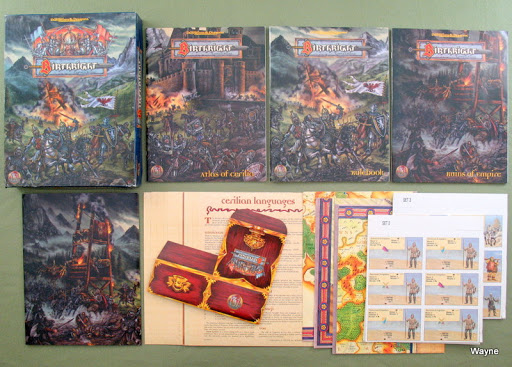 Birthright Box Set from TSR
Back in 2018 the team over at Seeds of Wars created and a Kickstarter for an updated set of Realm Management tools for this type of campaign play.  They were unable to secure the rights to apply their new system to the original AD&D Birthright setting they released the updated system for a new original world of Ceres.  The 2018 Kickstarter was successfully funded and an updated version of the realm management system was delivered to backers.  One of the stretch goals that was not met was a proposed web base App to help with book keeping.  The creators pledged to return with a new Kickstarter to focus on the web based support. The new Kickstarter campaign can be found over on Kickstarter at Seeds of Wars: The smart web application for RPG realm management.  The Kickstarter campaign has just over a week left as of the writing of this article and they are close to meeting the goal for the campaign.
In full disclosure, I am a backer of the campaign and huge fan of the original Birthright Setting and The Seeds of Wars team updated version of the rules management system.  I would encourage readers to take a look and spread the word to others that may not be aware of Kickstarter.  The out of print setting of Birthright is a small group of loyal fans and an even smaller group of people who would interested in a Web App for helping with Realm maintenance and upkeep.  Any assistance to spread the word of this Kickstarter would be appreciated.

Posted by Grayranger at 6:52 AM