In Memory: Hemo (aka John Williams)

A friend of mine passed away yesterday.  His name was Hemo, otherwise known as John Williams.  You see I know his name but he was introduced to me as Hemo via online gaming.  So that became the name that I know him as.  I was introduced to Hemo by our mutual friend Eric Whiteaker, it was inside the MMORP (massive multiplayer online roleplaying game) World of Warcraft.  Another interesting aspect of my relationship with Hemo was the fact that I have never met the man in person.  This may come as a surprise to some people but over the years I have formed very close friendships with others via online games.  Those people are very dear to me and hold a special place in my heart.  Hemo was one of those.

I want to take a few minutes of your time to tell you about Hemo and who he was to me, and how he affected my life.   To do that I need to give you a small amount of context and background.  I lost my father when I was 28 years old.  He was absent during a large part of my teenage years as well due to divorce.  I also lost my step dad several years later.  Both my father and step dad were great men who didn’t have enough time.  It’s been difficult to keep a father figure in my life.  Remember this point comes into play later.

Eric belonged to a raiding guild Calamitous Intent and wanted to bring some of his real life friends into his WoW world and share the fun and friendship he had found online.  Several of us were lured into this game by Eric’s siren song of fun!  We formed our own guild and fumbled around and generally got in our own way while we played.  During that time several of us expressed an interest in trying to raid, but with the exception of Eric, none of us had the skill or experience to actually pull it off.  Enter Hemo; he was taking a break from Calamitous Intent’s raiding schedule and thought it would be a fun project to teach us newbies how to do some old school raids. 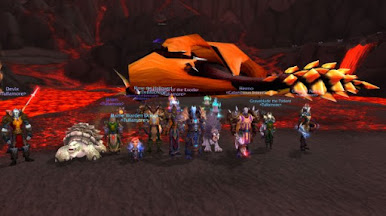 We started to progress as a guild during the Wrath of the Lich King expansion of WoW.  It was painful.  We were very motivated, but lacked any raiding background.  Most of us only had a functional knowledge of how to use our characters in a raid environment.  He patiently worked with us to explain the boss mechanics and even give pointers on how to use our characters more effectively.  I remember how flabbergasted he was to learn that I was Druid healing with no add-on’s.  Which by the way.  I have never used an add-on, and I think I did fairly well as a healer.

This process continued over the course of the year.  Over time we moved away from the older raids and improved our skill enough to eventually become a competent raiding group.  We even managed to take down the Lich King.  We would spend hours filled with laughs, jokes, arguments, and stories.  Some of the stories are more true than others but that's how stories go…

As real life started to interfere with our games, some of us would drift out of the social circle for a bit.  We would always manage to find our way back a few months later.  It was always as if we had never left when we would come back.  Our game of choice has changed over the years; WoW, 7 days to die, Marvel superheroes (old school RPG via Roll20), etc but the games didn’t really matter.  It was more about hanging out with friends and sharing our lives and stories with each other.

At some point Hemo figured out my daily routine and knew that I got up in the mornings around 4:30AM to do my business in the bathroom.  He started sending his famous memes and videos.  This happened several days each week and it put a smile on my face to see those wacky postings.  When I asked him about it he just laughed and then promptly doubled down on the amount and volume he was sending.   They were always hilarious, and he knew that he had a captive audience for a few minutes each morning.

Then came the day that I became a father.  After 8 years of trying, my wife and I had given up that it was ever going to happen.  One day that all changed and I was suddenly a dad.  As any father can attest; I was excited, scared, and didn’t really have a clue what the heck I was doing.  It was during this time that I found myself alone with Hemo on Mumble one day.  We started talking about some of my concerns/fears about being a dad.

Hemo spent the better part of 4 hours listening to my concerns and sharing parts of his life.  He told me of his success stories with his own family and about the times where, I quote, “he screwed up colossally”.  It helped set my mind and heart at ease to hear from someone that I respected that he had not done it all perfectly.  This conversation we had over voice chat is one of the most important ones I have had as an adult.  It helped me find my center and feel more prepared to tackle this whole dad thing.

Over the next several years, Hemo and I would have more conversations along those lines.  I would be seeking advice about the next parenting hurdle I had encountered.  His advice wasn’t always a direct answer, more often than not, it was a cautionary tale of the mistakes he had made, and perhaps I should try another approach.  I took these talks to heart.  I  push forward and do my best with Joseph and my family everyday.

I know he was special to everyone who knew him, and that we all have our stories about who he was and how he affected our lives.  This is how he affected my life.  He didn’t replace my Father or Stepdad, but his guidance, advice, and open ears definitely helped me find my path to being a better dad.

I did give him cursory thanks each time we spoke, but I never got to tell him sincerely,

Posted by Grayranger at 7:49 AM