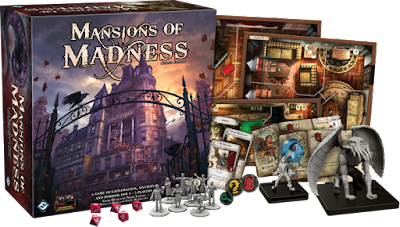 I have seen a few posts online about the game, Mansions of Madness by Fantasy Flight Games and thought it looks interesting.  I must confess, before the first part of 2017, I have never actually read any H.P. Lovecraft or being very familiar with the Chuthlu mythos.  So back in February, I took it upon myself to get a copy of the collected works of H.P. Lovecraft.  I quickly discovered that Lovecraft is exhausting to read.  I have to take the short stories a few at at time and longer stories have to broken down into manageable lengths, by taking breaks and reading non-Lovecraftian fiction during those breaks.

That being said, I have found the creepy world Lovcraft fascinating.  I was looking forward to trying my hand at Mansions of Madness. 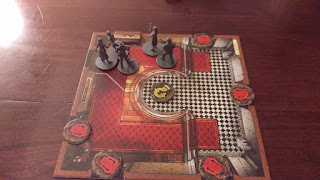 The character selection is impressive.  The copy of the game I played had several of the expansions and a multitude of characters to choose from.  It was a bit overwhelming choosing my first character.  I tried to balance all the attributes and get a special ability that would be frequently useful.  I found out that during the game when you have to make a feat roll, the roll is random as to which trait it may call upon.  In other words you may attempt to shoot a bad guy but instead of using agility you have to use a different characteristic such as willpower.  This randomness didn't make much sense and left me feeling frustrated 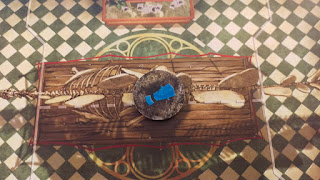 The map-tiles are also plentiful and reused in various scenarios.  I was happy to see that even when you reuse a tile it is often is a fashion that does not feel repetitious.   I also like how you use token to make the lighting and persons/points of interest that your characters will interact with during the game.

We have played several scenarios; some of which are more action oriented and a few that are more investigation based.  I personally enjoyed the more action based scenarios, and guns were very effective against the baddies.  Also fire is bad, for both the investigators and monsters.

The app that is used to interact with the game is very interesting.  It does add to the atmosphere via music and sound effects during play.  I had hoped it would be more of a game in and of itself, but its just a bare  bones map that you select icons to interact with and it doesn't care about the number of actions or which player turn it may actually be at the time.  This makes it easy to cheat on actions as we found on some of the puzzles.  I am convinced that you could spend an entire game worth of actions attempting to solve some of the puzzles and still not have enough actions to solve it before the game is over. 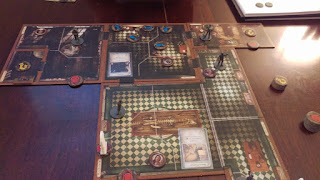 The game is on new edition but all the previous edition material is still useful.  As is the expansions that are available.  There are lots of different scenarios you can choose from.  I have played around 8 different scenarios and still enjoy the game each time.  We have found that our play group is thorough and we tend to explore as much as possible, so our play times tend to run longer than the suggested run time.

The lovecraftian horror is present thorough out the game and you visit several of the locations and story elements from Lovecraft's fiction.  I would recommend the game to any fan of Lovecraft and his collected works.

The game is readily available from several online sources and I have seen in it on the shelf in several local game stores.  The base game price hovers around $80.00 for the new 2nd edition.