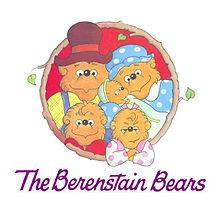 I was listening to the radio a few years ago when the DJ came on the air and started talking about the Berenstein Bears.  You know the children's books from years ago,written by Stan and Jan Bernstein.   Now you may or may not have noticed that I have spelled the name Berenstein different than what is depicted in the picture to the right.  Well the DJ on the radio show was talking about how he swears that the name of the books from his childhood was written The Berenstein Bears and not The Berestain Bears.

I listened to the radio show and thought they DJ was trying to pull a fast one and do some War of Worlds type hullabaloo.  So when I went home I went and got a box of old books out of the closet to easy my troubled mind that the books from my childhood were spelled correctly as The Berenstein Bears...but when I looked at the books from when I was a kid, they were spelled, Berenstain.  My mind reeled and I felt very odd and detached as the book in my hands was very different from what I remembered.  The world felt un-real to me in that moment.

After gathering my thoughts, I went to my good friend Google and did a quick search to see I could figure out when it was changed and how on earth my books in the closet were switched out.  What I found quickly opened up a rabbit hole that I chased well past midnight that night.

At the link listed above I found  a website created and ran by Fiona Broom and it was a collection of stories about people from around the world who remembered people, places, and events differently than what was accepted as the "Real History".  I read and read all night long about things that appeared crazy, such as when did Nelson Mandela die...did he die in prison years ago or was he still alive?  That specific factoid is where the name of the one of the most popular theories was coined.

The theory is that people, either single or in large groups have lived a past that has a shared history but at some point they crossed over into a parallel reality that is similar to their original reality but different in some minor fashion. This theory is used to explain why so many people all believe that the real children's book name is The Berenstein Bears  and not the one with ..stain... in the name.

I don't have any answers, but if you get a few minutes then check out her website and see if any of the stories hold true for your memories.
Posted by Grayranger at 3:12 PM